Posted by The Editor on October 25, 2011
Last week, BLUE COUGAR FOOTBALL held an open forum for nicknames for BYU linebacker Kyle Van Noy. Thank you to everyone who participated.

If you watched the Brigham Young Cougars play the Idaho State Bengals, you know Van Noy played another nickname worthy game. On the game’s first series, he helped set the tone by blocking a punt. He had two sacks. Both sacks took Idaho State out of field goal range and forced the Bengals to punt. Van Noy ended the game with 4 tackles, 3 tackles-for-loss, 2 sacks, 3 quarterback hurries, and that blocked punt. He did all this in less than three quarters of play.

That leads us to the question: What nickname do you give a guy who plays like this? There was a wide range of submissions. A complete list of all the submissions is included at the end, as well as links to where you can find explanations for them.

On Twitter, @corey4byu pointed out that Van Noy’s family has already dubbed him “The Savage” and they have made t-shirts. 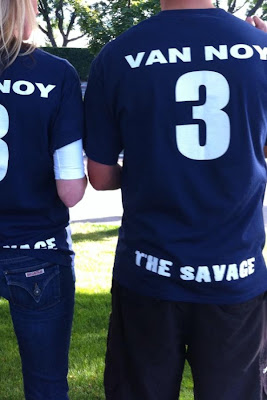 I was unaware of these shirts and the nickname. The nickname campaign on BLUE COUGAR FOOTBALL was not intended to replace the Savage. I can go with that, for now.

My primary reason for looking for a nickname for Van Noy was to find something catchy that fans could use on signs at games and could be used as part of a campaign to promote him for national awards next year.

I don't know how promotable “The Savage” is. I like it in the sense that you want something intimidating for a defensive player, and something that gives the impression he is superhuman and will make plays that are rarely seen. However, I think “The Savage” could turn off some of the national voters. It might portray Van Noy as being a little too reckless or out of control on the field. Maybe I am just being over sensitive.

Anyways, here are my top 5 (leaving out my own suggestions) from all the submissions:
Once again, thank you to everyone for the submissions. The complete list is below. Some might not make very much sense without the explanation that accompanied them in the submission. That is why I have included the links to where you can find the reasoning behind the nickname, if you so desire.

http://www.bluecougarfootball.com/2011/10/nickname-for-kyle-van-noy.html
The Editor appreciates all feedback. He can be reached via email at bluecougarfootball@gmail.com
Brigham Young Cougars Kyle Van Noy