BYU in NFL, Week 14: Williams and Nacua go head-to-head, Ansah gets a sack, Van Noy out with injury


Week fourteen saw some more good things for some former BYU Cougars in the NFL.

Jamaal Williams added to his highlight reel as he bumped his total touchdowns up to six with another multi-touchdown game. Ansah notched another sack. He is up to a half dozen this season.

The Cleveland Browns are the only franchise with a former Cougar that is out of the playoff hunt.

Here is a complete rundown of former Cougars in the NFL for week fourteen.

Ezekiel Ansah, Detroit Lions (7-6, W 24-21 Tampa Bay Buccaneers)
Ansah seems to be back to full health. He logged seven tackles, one sack, and one tackle for loss. All that production came on just 38 downs of action (54%). The sack came on the final play of the game as Tampa Bay was making one final, desperate try to win.

Kyle Van Noy, New England Patriots (10-3, L 27-20 Miami Dolphins)
Van Noy sat out the Monday night game in Miami. He first hurt his calf two weeks ago. With the Patriots facing the Pittsburgh Steelers next week, it was a smart move to let Van Noy rest.

Harvey Langi, New England Patriots (10-3, L 27-20 Miami Dolphins)
Langi is out for the season recovering from injuries sustained in a car crash.

Jamaal Williams, Green Bay Packers (7-6, W 27-21 OT Cleveland Browns)
Williams had an active game. He was in on 50 offensive plays (66%). For most of the game he was the Packers' leading receiver and rusher. He finished with 118 yards of total offense (49 rushing, 69 receiving). He had his second multi-touchdown game with one on the ground and one in the air.


Later, he walked in from the 1-yard line. This TD started the Packer's rally to force OT and get the win.

.@jswaggdaddy gets his second TD of the day to make it a one-score game! #GBvsCLE #GoPackGo pic.twitter.com/GiyeqCAXzs
— Green Bay Packers (@packers) December 10, 2017


The NFL put together this YouTube video of exclusively Williams highlights from yesterday.

Bronson Kaufusi, Baltimore Ravens (7-6, L 39-38 Pittsburgh Steelers)
Kaufusi did not play. Maybe if he did, the Ravens wouldn't have blown an 11-point, fourth quarter lead.

Taysom Hill, New Orleans Saints (9-4, L 20-17 Atlanta Falcons)
Hill played for the second game in a row. Still not as a quarterback, but on special teams. He played a total of 11 special teams downs (46%).

Kai Nacua, Cleveland Browns (0-13, L 27-21 OT Green Bay Packers)
The week after Nacua got his first tackle, he got his first start. With the increased playing time, Nacua was able to make five tackles. One of his tackles was a take down of Jamaal Williams. Nacua also got a 15-yard unnecessary roughness penalty for head butting a Packers player out of bounds, but it didn't hurt the team as the Packers punted on the drive. Nacua was in for 75 defensive downs (99%), as well as three special teams plays (12%). 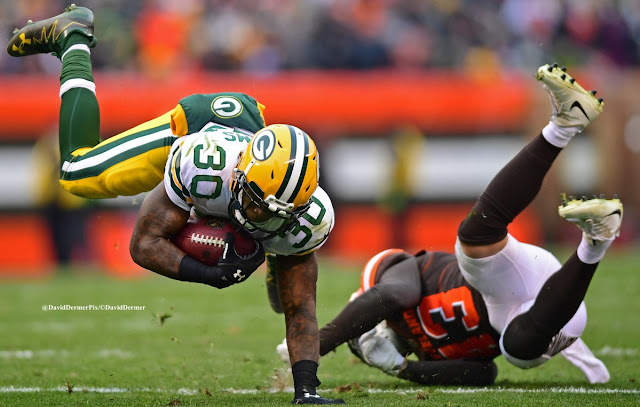