BYU announces the first 13 members of the 2018 recruiting class 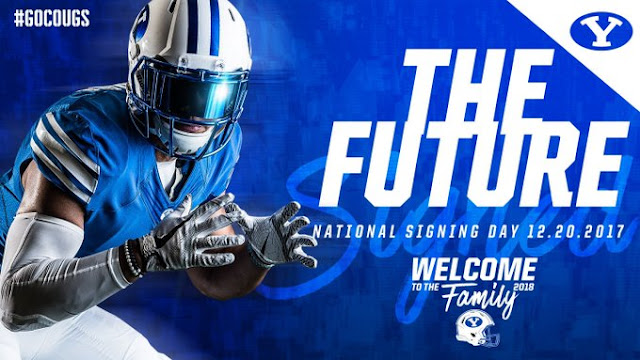 It felt like Christmas came early today. Many high school football players saw their longtime wish of playing major college football on scholarship come true. For the first time ever, the NCAA held an early signing period for football. The BYU Cougars publicly welcomed 13 signees today. The early signing period runs through Friday, December 22. It is possible BYU will have a few more commits turn into signees over the next two days.

There was also this interesting tweet about players who signed and sent their national letter of intent, but requested BYU keep it private until the traditional first Wednesday in February.

Lamb also said that a couple of recruits have signed, but don't want it announced until February's signing day. Tuiaki said he's not sure why some guys don't want it out, but thinks they might want to announce in February in conjunction with classmates.
— Jay Drew (@drewjay) December 20, 2017


Here are the 13 players BYU officially welcomed to the family.

Harris LaChance, OL, 6'8", 275, Herriman High School
Harris LaChance signed as a return missionary transfer. He originally committed to Utah State in 2015. When he returned home from his two-year mission to Nashville, Tennessee for the Church of Jesus Christ of Latter-day Saints last June, Utah State didn't have a scholarship for him. Before his mission, TCU, Wisconsin, and Washington showed interest in LaChance. He can play offense or defensive line.

Here is an interesting tweet about another option Lewis had.

"Tysen Lewis was getting calls from Chip Kelly at UCLA asking him to hold off on signing with BYU. He stayed committed to BYU and signed today" @Mitch_Harper
— ESPN960Sports (@espn960sports) December 20, 2017


Stacy Conner, QB, 6'5", 185, Wylie High School
Conner recently committed to BYU. He had been a UNLV commit, but with all the coaching and other recruiting changes that had happened since the end of BYU's 2017 season a spot opened up for him, and he jumped on it. He passed for over 1,000 yards each of the last two seasons at two different schools. Baylor, Mississippi State, Washington, Purdue, and Cal also showed interest in Conner.

Ben Tuipulotu, TE, 6'4", 200, Nation Ford High School
The Tuipulotu legacy goes back a long way at BYU. Ben's father Peter wore the blue and white in the late 80s and early 90s. His brother signed two years ago, and is currently serving a mission. Peter, however, was just following in his older brother's footsteps. Tom Tuipulotu started it all in 1983. Ben is coming all the way from South Carolina. He is an athletic player who played safety, receiver, and quarterback. His sophomore season was his most impressive season with 126 tackles, seven interceptions, two forced fumbles, and two fumble recoveries.

Jacob Smith, OL, 6'6", 305, Rosemount High School
Smith was the third offensive lineman of the day to sign, but he was the first from outside Utah. He hails from Minnesota and had an impressive list of schools recruiting him, including Michigan, Wisconsin, LSU, Arkansas, and Minnesota. ESPN ranks Smith as the 4th best player in Minnesota. He played varsity all four years in high school and helped his school make the playoffs each year.


Isaac Matua, LB, 6'3", 205, Kearns High School
Coming from Kearns High School in the Salt Lake Valley, Matua has, literally, been a Cougar for four years already. He also played quarterback passing for 1,219 yards, rushing for 515, and accounting for 19 total touchdowns as a senior. Matua made 48 tackles as a junior.

Barrington is a three-star recruit from the state of Washington. ESPN rates him as the 11th best player in the state. Like Tuipulotu, Barrington is following in the footsteps of his brother Clark who signed with BYU in 2016. He had a lot of Pac-12 interest, including Stanford, Oregon, UCLA, Washington, and Washington State.


Oliver Nasilai, LB, 6'2", 245, Jessieville High School
Nasilai had aspirations to play at Arkansas, the flagship school in his home state, or even the Big 12 for Oklahoma State, but is now a Cougar. He was a three-star recruit according to 247Sports and Rivals. Earned All-State, All-Conference, and 7A West Conference Defensive Player of the Year honors.

Chinonso Opara, DL, 6'8", 270, Juan Diego Catholic High School
Although Opara had a three star rating, he is a project player. He is originally from Nigeria, and is still a raw talent. If he can end up like Mohammed Elewonibi and Ezekiel Ansah did, then he will be worth all the extra effort to develop him. He has played on three state championship teams with Juan Diego.


Brach Davis, DB, 6'1", 170, Olympus High School
BYU is banking on Davis' potential. He has a lot of speed, but injuries have kept him off the field most of his junior and senior seasons. Kalani Sitake said that he thought he saw enough when Davis came to camp to offer a scholarship.


Brayden Cosper, WR, 6'3", 195, Bingham High School
Cosper was the top ranked wide receiver in the state of Utah by Scout, and has a three-star rating on 247Sports. He was named first-team All-State, and had 918 yards and nine touchdowns as a senior. Cosper was named the MVP at the Level Up Elites Camp.

Talan Alfrey, DB, 6'3", 185, Auburn Mountainview High School
Alfrey is another three-star recruit on 247Sports. The same recruiting service has him rated as the 18th best recruit in the state of Washington. He is a great athlete who played all over the field, and earned accolades in all areas: All-State as a wide receiver, All-League Defensive MVP, All-Area as a punter. Alfrey had a lot of interest from the Pac-12 schools in the Pacific Northwest.