When I first heard the news that former BYU Cougars linebacker Kyle Van Noy was traded to the New England Patriots, my first thought was, "He's going to win a Super Bowl." Lo and behold, just a few months later Van Noy and the Patriots were Super Bowl LI Champions. I didn't know it would be so fast, but I knew the Patriots were the class of the NFL. Since the beginning of this century, the longest New England has gone between Super Bowl appearances is four years.

With Van Noy reaching the pinnacle in just his first season as a Patriot, the question then became, how many more Super Bowls will he play in? Once he signed a contract extension back in September 2017 that would keep him with the Patriots through 2019, it seemed highly likely that he would play in at least one more Super Bowl. Now, that might not be so certain if the rumors coming out of New England are true.

Should the nucleus of the Patriots dynasty implode, then Van Noy could become BYU's latest alumni with a, surprising, one-and-done Super Bowl resume. 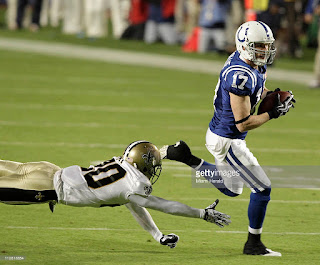 Austin Collie
Wide receiver Austin Collie broke Cougar fans' hearts when he decided to forego his senior season and entered the 2009 NFL Draft. One year later, when he was Peyton Manning's go-to red zone receiver and playing in Super Bowl XLIV, it was hard to criticize his decision. Ten years ago, the Indianapolis Colts were a model organization. After Collie reached the Super Bowl his rookie season, I had the same question about him as I did Van Noy 11 months ago: how many more?

Before Super Bowl XLV could be played, Collie became the poster boy for concussions at the height of the controversy over the NFL's treatment of head injuries. He was able to return and played the entire 2011 season, but by that time Peyton Manning was done playing in a Colts uniform. Injuries and Andrew Luck forced Manning out of town. A knee injury cut short Collie's 2012 season after just three games. He, too, was labeled as damaged goods and done in Indianapolis.

The Patriots picked up Collie for the second half of the 2013 season, but that was not one of the seasons they made a Super Bowl run. After that, Collie was prematurely out of the NFL having never returned to the Super Bowl.

Dennis Pitta
Tight End Dennis Pitta played with Collie at BYU. He stayed for his senior season in 2009, and then the Baltimore Ravens drafted him in the fourth round of the draft. In his third season, 2012, Pitta had become an integral part of the Ravens offense.

The Ravens had been a perennial playoff team. At times, they were serious contenders to win the AFC. That 2012 season, they finally broke through and made it to the Super Bowl.

Pitta caught a touchdown in the big game, and the Ravens beat the San Francisco 49ers, 34-31. That completed a season where Pitta caught 61 passes for 669 yards and seven touchdowns during the regular season, and 14 passes for 163 yards and three touchdowns in the post season. The future looked bright.

Ravens quarterback Joe Flacco appeared to have turned a corner during that Super Bowl run. Pitta had become his favorite target. Both were young, and the odds looked good that this duo would take Baltimore to another Super Bowl.

Pitta wouldn't play another full season until 2016. A hip injury limited him to seven games over the next two seasons (four in 2013, three in 2014). Pitta missed the entire 2015 season. Doctors advised him to retire, but Pitta was persistent. He was finally cleared to play in 2016. He had career highs for receptions (86) and yards (729), but Van Noy and the Patriots represented the AFC in the Super Bowl.

Following the 2016 season, Pitta retired with over 2,000 yards receiving, but just one trip to the Super Bowl.

Aaron Francisco is that last BYU Cougar, going by last season played in Provo, to make more than one Super Bowl appearance during his NFL career. Francisco's senior season at BYU was 2004. He played in back-to-back Super Bowls with the Arizona Cardinals (XLIII) and Indianapolis Colts (XLIV) after the 2008 and 2009 seasons.

New England Patriots
The road to the Super Bowl was already going to be tough for the Patriots this season. Although they beat the Pittsburgh Steelers during the regular season, it was a dog fight and very controversial. Even with home field advantage, I have my doubts that New England will get by the Steelers, and that is assuming there is no trouble in paradise. The rumors reported by ESPN adds a distraction, especially if the players know there are some truth to them.

In the past, the Patriots, namely Bill Belichick, perfected the art of eliminating distractions and preventing outside influences from impacting game preparedness and on-field performance. However, this distraction seems more serious than those in the past.

The Super Bowl is not a given this year. As for next year and beyond, we have to wait and see what happens with Belichick, Tom Brady, and Robert Kraft. There are several NFL franchises that go from the league's elite to miring in the muck for the better part of a decade, or longer, just because they change quarterback or head coach. If the dream team breaks up, the Patriots will no longer dominate the AFC. At that point, all bets are off on when the Patriots might make it to the Super Bowl again.

Collie and Pitta can also serve as cautionary tales. At the time of their Super Bowl appearances, I could not fathom how injuries would disrupt their careers. Van Noy has already had his own struggles with injuries throughout his pro career. They derailed his development in Detroit, and caused him to sit out most of the final four games this season.

Going outside the BYU bubble, everyone remembers that Dan Marino only had one Super Bowl appearance in his illustrious career, which also came very early. A more modern reference is Aaron Rodgers with the Green Bay Packers. He is widely considered one of the most elite quarterbacks in the game right now, but he has only reached one Super Bowl. Time will tell if he gets to another. (For the sake of former BYU running back Jamaal Williams, let's hope Rodgers and the Packers do make it to the Super Bowl soon.)

Let's not forget, if not for an impeccably timed trade to the right team, Van Noy still wouldn't have been to the Super Bowl. He would still be in Detroit with his former Cougar teammate Ezekiel Ansah watching the entirety of the playoffs from the couch.

Moral of the story? Playing in the Super Bowl is a privilege that should not be taken for granted. Getting there once is hard enough. Getting there twice has proven to be extremely elusive.