BYU in NFL, Week 17: Ansah has another 3 sack game, Nacua becomes part of history, Saints continue to mix it up with Hill


Week seventeen ended the 2017 NFL season for seven former BYU Cougars (two were already done due to injuries). However, Kyle Van Noy, Daniel Sorensen, and Taysom Hill will keep playing since their teams made the playoffs.

This week, Ansah was an unstoppable monstah for Detroit, again. Nacua matched his season high for tackles as his Cleveland Browns became part of history with an 0-16 season. Taysom Hill is still drawing a lot of fan interest as the Saints keep adding to what he does.

Here is a complete rundown of former Cougars in the NFL for week seventeen.

Ezekiel Ansah, Detroit Lions (9-7, W 35-11 Green Bay Packers)
Ansah must be mad about being left off the Pro Bowl roster. He got three more sacks, two on third down. The other one was a sack by default on an intentional grounding call. Ansah had four total tackles in the game. He also got pressure and forced an incomplete pass on a third down play. His one tackle that was not a sack was on the second play of the game when he took down fellow Cougar Jamaal Williams. Williams and Ansah were teammates at BYU for one season (2012). He did all this in 40 defensive snaps (59%) and one special teams snap (4%).

Ansah received an 85.0 rating from Pro Football Focus. It was the highest for any Lions player. PFF also gave him the game ball. Ansah's score for the entire season was 81.0, which is considered above average. 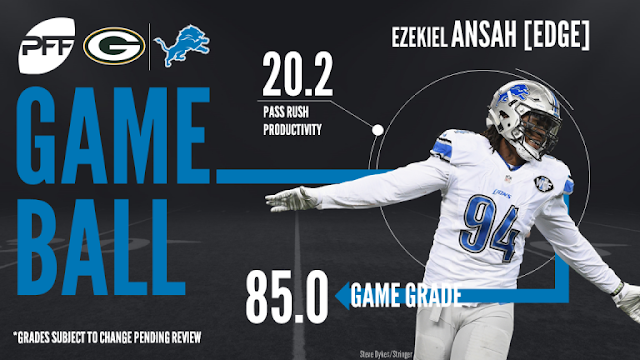 Daniel Sorensen, Kansas City Chiefs (10-6, W 27-24 Denver Broncos)
Sorensen did not play. He was one of several starters held out to get a little rest before the playoff run starts next week.

Sorensen received a poor rating (39.7) from Pro Football Focus for the season.

Harvey Langi, New England Patriots (13-3, W 26-6 New York Jets)
Langi is out for the season recovering from injuries sustained in a car crash.

Jamaal Williams, Green Bay Packers (7-9, L 35-11 Detroit Lions)
Williams made a strong showing, despite Green Bay not generating many points. He had over 100 yards of total offense for the fourth time this season. He totaled 82 rushing yards and 31 receiving. Williams picked up three first downs on the ground and one through the air. In total, he played 56 downs on offense (82%).

Near the end of the game, he was evaluated for a concussion.

Williams received an average rating (71.0) from Pro Football Focus for the season. He also had a little trophy for run and receiving with his score. It is unclear, however, what is the meaning of those trophies.

Bronson Kaufusi, Baltimore Ravens (9-7, L 31-27 Cincinnati Bengals)
Kaufusi did not play. He has seen action in just three games this season. The loss kept the Ravens out of the playoffs.

Kaufusi had a below average rating (68.2) from Pro Football Focus.

Taysom Hill, New Orleans Saints (11-5, L 31-24 Tampa Bay Buccaneers)
Hill made a tackle early in the game on the Saints' second kickoff. The Saints continued to experiment, or get creative, with Hill by lining him up in different places. He lined up as an up back in punt formation. The chances seem very high that he will be directly involved in a trick play during the playoffs. As for Sunday, he played 15 special teams snaps (58%).

Hill was given a poor rating (52.6) by Pro Football Focus, but he also had a little trophy, like Williams, for pass and run.


Kai Nacua, Cleveland Browns (0-16, L 28-24 Pittsburgh Steelers)
Nacua continued his late season surge as he started for the third time this season. He tied his season high with five tackles. His first tackle came on the game's opening kickoff. His other four tackles came on defense. One was a third down stop to force a punt. Nacua saw action on 50 total plays: 39 defense (66%) and 11 special teams (41%).

Nacua was rated as average (76.0) by Pro Football Focus.

Michael Davis, Los Angeles Chargers (9-7, W 30-10 Oakland Raiders)
Davis made the tackle on the final kickoff of the game. He got in 16 plays on special teams (73%). He has had a good season playing special teams.

Jordan Leslie, Denver Broncos (5-11, L 27-24 Kansas City Chiefs)
Leslie signed with the Broncos this week. He was listed on the active roster, but did not play in this game.

In his two games with Cleveland, Leslie earned an average grade (73.6) from Pro Football Focus.