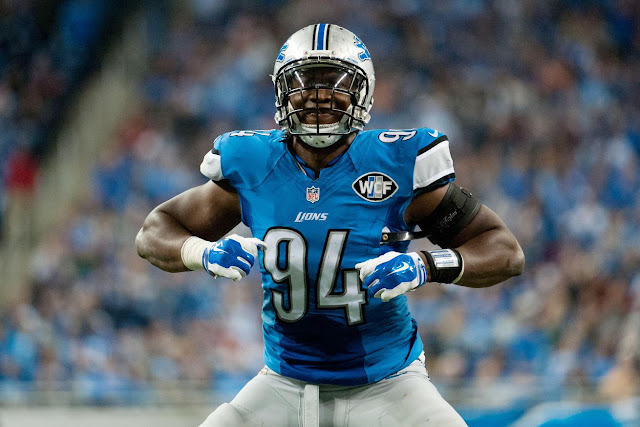 In many ways, the 2017 football season was one of the worst in a long time for the BYU Cougars. It was the opposite for former BYU Cougars in the NFL. It has been a long time since BYU was as well represented in the NFL, both in quantity and quality, as it was in 2017. Chief among those former Cougars was Ezekiel Ansah. At least, that's what the fans say.

Ansah, the fifth year veteran playing for the Detroit Lions, beat out rookie Jamaal Williams in the survey conducted by Blue Cougar Football. Site visitors had the opportunity to answer the question, "Which former BYU Cougar had the best season in the NFL?" In the final count, Ansah had four more votes than Williams. Complete vote counts for each player in the survey can be found in the table at the bottom of the page.

Here is the percentage breakdown.

Harvey Langi, Jordan Leslie, and Bronson Kaufusi were not options to choose due to their lack of playing time this season.

Ansah was having a mediocre season until the final two weeks. His stats and effectiveness for the first half of the season were not very good as Ansah played despite having nagging injuries. He finally sat out two games in November, and returned for the Thanksgiving Day game against Minnesota. After returning to the lineup for the final six games, Ansah had 59% of his tackles and 67% of his sacks. In just the final two games, he had 11 tackles and six sacks.

Ansah finished with 44 tackles, which is five less than his career high, and 12 sacks, which is the second most in his career. He reached the 200 tackles and 40 sacks milestones, and forced the tenth fumble of his career.

The Green Bay Packers eased Williams into action. He only played one or two series for the first three games. He got dinged up in game four. He had to wait four more games before seeing significant action again. Like Ansah, Williams came alive in the second half of the season. He finished the season with over 800 yards of total offense (556 rushing, 262 receiving) and six touchdowns (four rush, two pass).

The Packers and Lions played each other in the final game of the regular season. Williams had a good game with 82 yards rushing and 31 yards receiving, but no touchdowns. Ansah had three sacks and the Lions won. Perhaps that game was the difference maker in who finished on top in this survey.

Daniel Sorensen had a career high for tackles in a season (89). He had 18 more tackles than any other Kansas City Chiefs player. He came up with 1.5 sacks and six tackles for loss. It is a little surprising Sorensen didn't receive more votes. The lack of votes can probably be attributed to his lack of impact plays, like he had last year. In 2016, Sorensen forced two fumbles, recovered three, and intercepted three passes--one of which he returned for a touchdown. Compare that to just one interception this season.

Kyle Van Noy had the best season of his career, but was a distant fourth in the survey. That is probably due to his calf injury. He sat out three of the final four games, and then playing very sparingly in the final game of the season. At the time of his injury, Van Noy was the New England Patriots' leading tackler. He also had 5.5 sacks and four additional tackles for loss. Had he not gotten injured, Van Noy might have been the run away winner.

John Denney, the long snapper for the Miami Dolphins, had another perfect season snapping for punts, field goals, and extra points. I can see where someone would give him their vote because of the consistent greatness.

Taysom Hill made his debut late, and only contributed on special teams. However, once he saw the field, New Orleans Saints and Green Bay Packers fans were obsessed with him. Again, I can see the logic to cast a vote for Hill.

I was impressed with what Ansah did. His explosive finish once he was at full strength, and the playing through injuries was admirable. Williams was impressive, as well. Not only did he put up those numbers as a rookie, he did it with an offensive line that wasn't very good and against defenses that didn't respect the quarterback's ability to throw the ball. While Sorensen had all those tackles, he was exposed a little this year with Eric Berry injured in the first game and out the rest of the season. Don't get me wrong, Sorensen belongs in the NFL, but it's clear he isn't an All-Pro.

All that being said, my vote for the best season would be Kyle Van Noy. I have no problem with the fact that he missed a few games, because virtually every BYU player in the NFL missed time this year. I also feel the meaning of this season for Van Noy has gone under the radar.

Last year, it felt like he was kind of along for the ride in New England. He arrived mid-season, and had to work his way onto the field. This year, he validated the move to trade for him, validated the contract extension that was announced the day after game one, and validated that he was every bit a reason for the Patriots defensive success. He made a huge tackle for loss against Atlanta near the goal line. When he was out of the lineup, the Patriots defense took a step back.

Hopefully, Van Noy's great season can have the same happy ending that last year's did, because I think it would be even more meaningful for him.


Thank you to everyone who participated. Don't forget to vote in this week's poll, "Has Matt Bushman already earned a spot in BYU's "tight ends club"? Feel free to email (see below) a reason for your response, or tweet your reason to @BlueCougarFball. I want to include some reasons from actual voters in next week's report on the results.