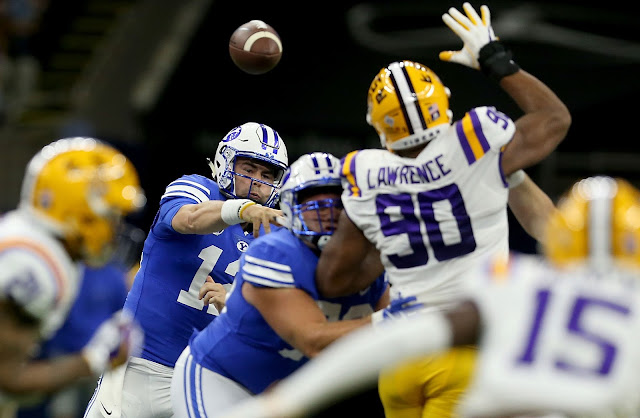 LSU Head Coach Ed Orgeron ruffled some BYU fans' feathers in July when he made a comment that could have been interpreted that playing BYU would be like playing a "preseason" game. Well, BYU didn't do anything to show that they deserved any more respect than that.

The 27-0 loss to LSU was the worst loss to a SEC opponent in school history.

BYU did manage to keep the game a scoreless tie after one quarter, but there still wasn't any sign of hope. Quarterback Tanner Mangum was called for intentional grounding on BYU's first series of the game, even though he was throwing in the direction of a running back for a designed screen play.

LSU scored on the second play of the second quarter. A 4-yard run by Darius Guice on the Tigers' second series of the game. That was immediately followed by LSU intercepting Mangum on a deep ball where the Cougar receiver made zero effort to catch the ball or prevent an interception.

LSU capitalized on the turnover, and scored four plays later to make it 14-0. After another BYU punt, LSU drove into field goal range, but missed the kick.

BYU had its best drive of the night coming out of the locker room to start the second half. Mangum completed a nice 17-yard pass to Matt Bushman, and a roughing the passer penalty added 15 yards to move the ball up to the BYU 44-yard line. However, on 3rd and 7, Mangum's pass to an open Talon Shumway on 3rd Down was incomplete.

That knocked the life out of BYU. The Cougar D did its best and limited LSU to two field goals in the red zone, and Khyiris Tonga and Fred Warner combined to stop a 4th and Goal from the 1-yard line. However, the Cougar O didn't pick up another first down until its final drive of the game.

PLAY OF THE GAME: Fourth Down stop at the 1-yard line.