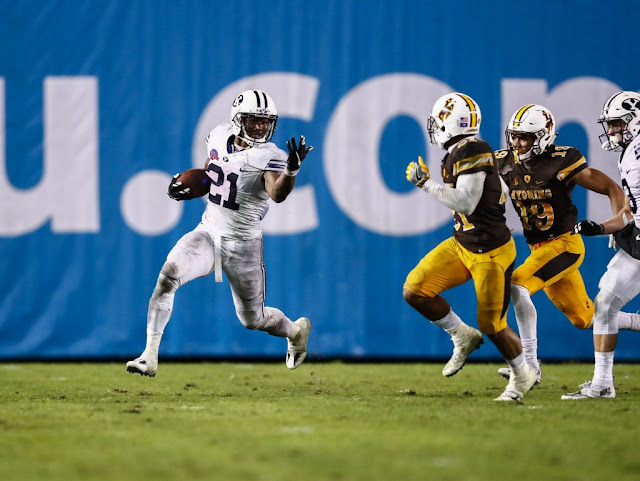 The Brigham Young Cougars may be known as Quarterback U, but it is actually better to be a running back in the first year of a new head coach.


Did you know that the top three, and four of the top 10, rushing performances in BYU history have come in a head coach's first season?

This phenomenon dates back to 1972 when LaVell Edwards became head coach. Pete Van Valkenburg set a new school record with 1,386 yards on 232 carries (6.0 yards per carry). He also scored 12 touchdowns.

Van Valkenburg's record stood until 2001 when Edwards' successor Gary Crowton had his inagural season. That was the year Luke Staley exploded for 1,582 yards on just 197 carries (8.0 yards per carry) and 24 touchdowns.

Crowton didn't last nearly as long as Edwards, and in 2005, Bronco Mendenhall was making his head coaching debut. Curtis Brown was the beneficiary this time around. He had his best season as a Cougar with 1,123 yards on 210 carries (5.3 yards per carry) and 14 touchdowns.

After Mendenhall moved on to the University of Virginia, Kalani Sitake inherited Jamaal Williams. In 2016, Williams had the third best season in BYU history with 1,375 yards on 234 carries (5.9 yards per carry) and 12 touchdowns.