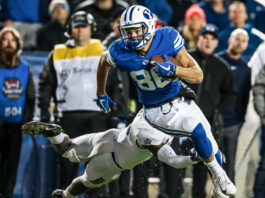 With a 45-20 loss Friday night, the BYU Cougars lost to the Utah State Aggies for the third time in five years.  It was also the first time since 1974 that BYU dropped two in a row to the in-state rival.

Although the Cougars didn't have six turnovers like last year, giving the ball away caused the game to get away from BYU in the first half. Utah State ran away with the game in the second half.

It was still a scoreless game with 7:48 to play in the first quarter when BYU faced 4th and 1 from the Utah State 39-yard line. Not only was Tanner Mangum's pass intercepted, it was returned for a touchdown.

BYU was unable to pick up a first down on its subsequent possession. Following the punt, Utah State drove 71 yards for a touchdown.

The Aggies quickly turned that into seven points. With 12:23 to play in the second quarter, Utah State led 21-0.

While the Cougars lost control of the game for this 10:30 stretch, BYU was able to put together an eight-play, 88-yard touchdown drive to close the gap to 21-7 with 4:28 to play in the first half.

The Cougar D got another quick stop giving the ball back to the offense with enough time to move into field goal range. Skyler Southam's 43-yard kick missed as time expired.

During halftime, Utah State regrouped and didn't let BYU's success to end the first half impact the rest of the game. The Aggies scored touchdowns on their first two possessions of the second half.

With 4:55 left in the third quarter it was now a 35-7 game. BYU wasn't done yet. The Cougars fired back with a five-play, 75-yard drive, highlighted by a 46-yard catch by Talon Shumway.

The Cougar defense got the ball back quickly. Mangum and co. were on the move again, quickly reaching the Aggie 34-yard line, but on the final play of the third quarter Mangum fumbled while being sacked. Utah State recovered.

The Aggies scored a touchdown on that drive giving them 21 points off turnovers.

After BYU turned the ball over on downs, Utah State kicked a field goal. With 3:39 left in the game, BYU made a change at quarterback.

Zach Wilson drove the Cougars down the field for one final touchdown. He completed the first touchdown pass of his career--an 18-yard grab by Gunner Romney. It was also Romney's first career score.