Posted by The Editor on April 08, 2011
For the second time this week, the Brigham Young Cougars added a great quarterback prospect. Bronco Mendenhall announced yesterday that Taysom Hill (Highland High, Pocatello, Idaho) had signed a scholarship agreement to enroll at BYU in January 2012. Hill is currently serving a two-year mission for the Church of Jesus Christ of Latter-day Saints in Sydney, Australia.

With both Hill and Tanner Mangum now in the fold, the BYU quarterback outlook is pretty clear all the way until 2020. No that is not a typo. Kind of mind boggling, isn’t it? Therefore, to make it clear for everyone, I have put together the ultimate BYU quarterback outlook. Go ahead and bookmark this page. It will come in handy for several years.

This outlook has three parts:

1. An explanation of the career path for each potential starting quarterback from 2011-19.
2. A series of spreadsheets tracking, side-by-side, each QB's year in school for the “best case” scenario, and three other possible scenarios. Additionally, an expanded spreadsheet tracking Taysom Hill, Alex Kuresa, and Tanner Mangum’s experience before they can reasonably be expected to compete for the starting spot is included.
3. A list of key dates when the incumbent starter will leave BYU and the starting spot will open up.

CAREER PATHS
Jake Heaps-Heaps will be the starter as long as he stays at BYU. This upcoming season, 2011, is his sophomore year. He will be eligible to turn pro following the 2012 season. It is way too early to tell if he will. The “best case” scenario for BYU football is for Heaps to stay for his senior year in 2013.

Jason Munns-Should Heaps leave early, Munns will be the most experienced QB and could occupy the spot for his senior season in 2013.

Taysom Hill-As noted, Hill will enroll nine months from now. With Heaps, Munns, Riley Nelson, and James Lark all ahead of him on the depth chart, redshirting seems to be a no brainer.

Hill will still be primed to compete for the starting spot in 2013 if Heaps leaves early. Should he win the battle then, Hill would have four years rather than three to start. If Heaps stays or Munns starts in 2013, Hill is almost a lock to start in 2014. The redshirt would benefit Hill giving him three years, rather than two, to start.

Alex Kuresa-Kuresa will be on the roster this upcoming season (2011). As with Hill, a redshirt appears inevitable. Kuresa will be fifth on the depth chart, and a mission is definitely in his plans.

He hopes to be back in time for spring football 2014 when BYU could have an opening, but Hill will have the inside track, and I expect it will be very hard for Kuresa, fresh off a mission, to unseat Hill.

If Hill does not redshirt, or goes pro a year early, Kuresa will have two years of eligibility left (2016-17). That would give Kuresa his best opportunity to start, but by that point, Kuresa will have Tanner Mangum to deal with.

In my opinion, Kuresa is going to end up as a security blanket. He will only get to play if Hill or Mangum flop.

Tanner Mangum–Mangum sounds like he will start his mission sometime during the summer of 2012, and, technically, could be back in time for the 2014 season.

My recommendation to him would be to greyshirt the 2014 season and wait until Januray 2015 to start his eligibility clock. You can call it the John Beck plan. I don’t have the NCAA rulebook memorized, but I think Mangum could still be present at practices (especially practices open to the public) and on the sidelines during games in 2014 to get his feet wet.

Of course, much of this depends on how Hill and Kuresa are playing. If Kuresa is a “bust” or has been moved to another position, and Hill did not redshirt or is such a great quarterback that he would leave for the NFL a year early, then it could be advantageous for Mangum to not redshirt 2015.

Regardless, if the quarterback spot is open in 2016, Mangum should be ready to compete for it. He will have been at BYU for two springs and two falls by the time the 2016 season opens.

SPREADSHEETS
That is looking at each quarterback individually and how his eligibility timetable could run. To better see how all these career paths align, I have put all five quarterbacks side-by-side on a spreadsheet and tracked each quarterback’s year in school.

The year that each quarterback is, reasonably, expected to compete for the starting job has been highlighted in BYU blue.

I have put an asterisk next to who I think will be the starter.

A fifth spreadsheet is included that is an expanded breakdown (Spring and Fall practices) of how long Hill, Kuresa, and Mangum will have been in the program before they compete for possible openings for the starting job. 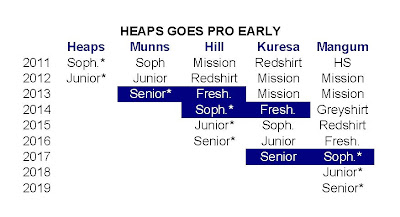 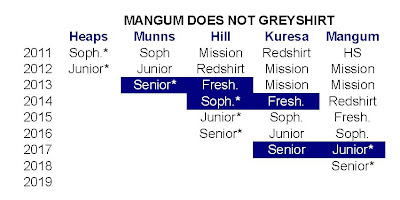 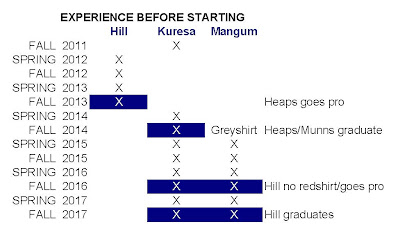 The main purpose of the “Experience Before Starting” spreadsheet is to illustrate that BYU should never have an inexperienced starting quarterback for the rest of this decade.

Year: 2013
Scenario: Heaps leaves a year early for NFL
Depth Chart: Munns (Sr.), Hill (RS Fr.)
Prediction: Bronco Mendenhall will be loyal to Munns and all the work he has invested into the program. Munns will be the starter.

Year: 2014
Scenario: Heaps/Munns graduates
Depth Chart: Hill (RS So.), Kuresa (RS Fr.), Mangum (Fr., if not greyshirting)
Prediction: Hill will easily win the starting job. Kuresa will be loaded with mission rust, as will Mangum, who will miss spring practices.

Year: 2016
Scenario: Hill is the real deal and leaves a year early for NFL
Depth Chart: Kuresa (RS Jr.), Mangum (RS Fr. Or RS So.)
Prediction: If Kuresa has shown he is legit, look for Bronco to favor him (more experience, more invested), especially if Mangum is a redshirt freshman. Each QB would get two years to start. However, if Mangum is head and shoulders better than Kuresa, Mangum should have invested enough to get the starting nod.

Year: 2017
Scenario: Hill graduates
Depth Chart: Kuresa (RS Sr.), Mangum (RS So. Or RS Jr.)
Prediction: The coaches would need some compelling reason to pick Kuresa over Mangum. It would be Kuresa’s only year to start, and the offense would go through two consecutive seasons of having to start over with timing and such with Mangum the next year. Mangum should end up the starter.

The Editor appreciates all feedback. He can be reached via email at bluecougarfootball@gmail.com