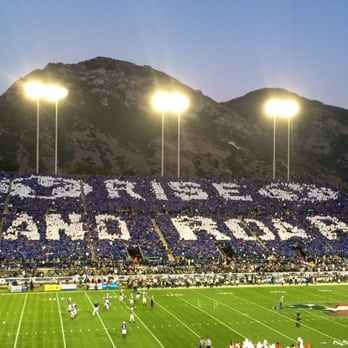 The San Jose State Spartans are coming to Provo, Utah to face the BYU Cougars this Saturday. As such, San Jose State head coach Brent Brennan is preparing his team for the challenges they will encounter.

"We know how challenging it is to play in Provo," Brennan said. "It's another great challenge for our football team."

The Spartans hail from one of the largest metropolitan areas in the country, but their games are sparsely attended. Even if just two-thirds full, LaVell Edwards Stadium will be a daunting scene for San Jose State. It doesn't help that the Spartans will rely on a redshirt freshman quarterback with only a few starts under his belt.

Brennan said of his quarterback, "We'll see how he handles the atmosphere. BYU is a hard place to play. Their crowd is rowdy; they're on you."

Besides needing to deal with BYU's home-field advantage, Brennan discussed how BYU would physically present a challenge on the field.

"We have to get ready for a physical kind of west coast style offense," Brennan explained. "Where they are big and physical up front, really on both sides of the ball. They have always been that way."

He made special note of the unique challenge Ula Tolutau presents.

"Then they are going to run a pretty big running back at you, so you have got to be able to deal with a 250-pound Polynesian running back who is quick, and powerful, and athletic."

The Editor appreciates all feedback. He can be reached via email at bluecougarfootball@gmail.com
BYU Cougars BYU Football Ula Tolutau