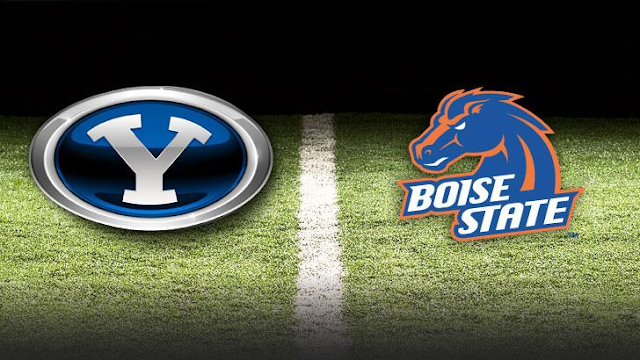 The BYU Cougars and Boise State Broncos are going at it again on Friday. What better way to prepare for the game than reliving the best BYU moments in the series. (Note: Videos isolating the specific play could not be found for every play, so you will have to click pause on some to get it to stop.)

Ezekiel Ansah's breakout game in 2012 started by blowing up a fake punt.

BYU got two safeties on special teams in the inaugural match up. In a snow game, the Boise State long snapper had the worst game of his life.

There has been another safety in the series. This one was more of a "traditional" safety. Logan Taele got current Miami Dolphins star running back Jay Ajayi in 2014.

BYU has been successful with the long ball on offense. John Beck had two against Boise State in 2004. The first to Todd Watkins, and the second to Austin Collie (back to back in this clip).

Taysom Hill got in the act with this 40-yard bomb to Mitch Mathews.


Among the long balls, there was this 81-yard pitch and catch from Christian Stewart to Colby Pearson.

Who can forget Tanner Mangum finding Mitchell Juergens twice for big touchdowns in 2015.


In between those two Juergens touchdowns was this beauty to Devin Blackmon.


Not the same kind of airing it out, but Taysom Hill took to flight on one of his 2013 runs.


There have been some stellar defensive moments. In 2012, a classic goal line stand starting at the one-yard line.

Boise State had a rash of turnovers in the second half of the 2013 game. Three consecutive possessions (be patient, a field goal gets squeezed in the middle of the turnovers).


Speaking of turnovers, the Cougar defense has not been afraid to pour salt in the wounds by returning interceptions for touchdowns. Let's start with Kai Nacua's classic in 2015 to seal the win.


Fred Warner did this as a freshman.

He topped that pick-six with, perhaps, the greatest play of them all. He tight roped walk down the sideline for a touchdown following his interception in 2016.