The BYU Cougars (2-7) passed for 332 yards, scored 41 points in just over three quarters, and dominated a team from the Mountain West Conference. It was good, old-fashion BYU football. BYU capitalized on five turnovers and a bevy of big plays to send the San Jose State Spartans (1-8) back to California with a 41-20 loss.

San Jose State started the game with a drive that resembled what BYU had done the last two games. With a mix of runs and short passes, the Spartans drove out near midfield before punting after coming up short on 3rd and 4.

BYU, on the other hand, looked like a completely different team. Head Coach Kalani Sitake preached aggressiveness all week, and that's what he got.

Tanner Mangum hit Jonah Trinnaman for 45 yards on the Cougars' first play. That opened up running lanes for KJ Hall who picked up 13 yards on 1st and 15 following a false start penalty. Three plays later, Mangum went deep again, and found Micah Simon in the end zone for a 23-yard touchdown. 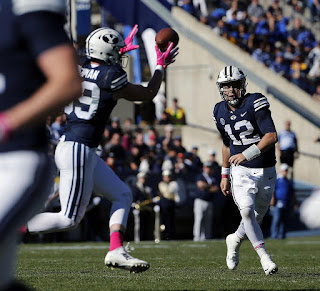 On the ensuing kickoff, Brayden El Bakari delivered a brutal hit that registered a 3.5 on the Richter Scale, and was felt all throughout the San Jose sideline. His hit forced a fumble, which he recovered at the 10. Two plays later, Matt Bushman was celebrating his second touchdown catch of the season, and BYU's second of the game.

The Cougar defense forced another punt, but BYU gave the ball right back when Mangum's pass on first down went through his intended receiver's hands and was intercepted by San Jose State.

It appeared BYU got the ball back just as fast when Dayan Ghanwoloku intercepted the Spartans' overthrown pass on first down. The pick was nullified by an iffy roughing the passer penalty. One had to wonder if the flag would have been thrown if two San Jose State players hadn't already gone down with injury. It felt like the officials were afraid the game might get out of control from a player health standpoint.

The Spartans took advantage of the call and got on the board with a 48-yard field goal.

BYU stormed right back down the field. Mangum completed four passes of at least 10 yards as BYU reached the San Jose State 16-yard line, but his 3rd down throw was behind Bushman. The Cougars had to kick a field goal, which missed. The score remained 14-3, and the first quarter ended two plays later.

Replay reversed the spot of the ball following San Jose State's third down run to start the second quarter. The reversal kept the drive alive, and brought life to the Spartan offense. For the first time, the Spartans moved the ball on the BYU defense. The Cougar D held on 3rd and Goal to force a second field goal; that closed the gap to 14-6.

It was as close as San Jose State would get. KJ Hall burst through the line and raced past the secondary two plays later for a 75-yard touchdown, and a 21-6 lead.

Two plays later, BYU had the ball back after Michael Shelton intercepted an errant throw. That gave BYU the ball at its own 48-yard line. After a 14-yard pass from Mangum to Aleva Hifo converted third down, it appeared that BYU was going to convert that turnover into points. That play was called back by a highly questionable offensive pass interference penalty. It resulted in 3rd and 25 and forced the Cougars to punt. 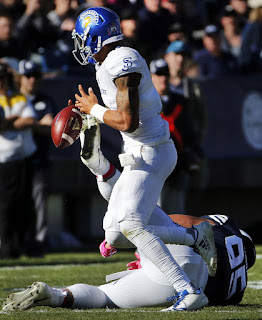 San Jose State's third turnover of the half gave the ball back to BYU. This time at the Spartans' 48-yard line. Zayne Anderson forced the fumble and Austin Lee recovered.

Mangum dumped the ball off to Hall, and he skirted his way for 26 yards to put BYU in scoring position. The Cougars would come away with only three points, which made the score 24-6 with 5:09 to play. BYU had already matched its season high for points in a game and surpassed its season average for total yards in a game.

Sione Takitaki sacked the Spartan quarterback for a 10-yard loss that helped force a punt that gave the Cougars the ball back with 2:32 to play before halftime.

The Cougars' two-minute offense successfully moved the ball to the Spartans' 10-yard line. The drive was highlighted by two first down catches by Hall, a 19-yard throw to Bushman, a bruising 15-yard run by El Bakari, and a gutsy 11-yard scramble by Mangum. On the final play of the half, Mangum's pass to the end zone was dropped.

Although the Cougars led comfortably, 24-6, there was a growing unease at the beginning of the second half. While BYU had moved the ball, the Cougars scored just 10 points in the final 24:34 of the half. Mangum had cooled off after his hot start. His accuracy was becoming erratic, he had resorted to scrambling a lot, and the downfield throws had disappeared. Add to that word from the sideline was Hall suffered an injury and would not play the second half. He accounted for 156 yards in the first half.

After punting on the first drive of the second half, BYU took over at its own 5-yard line. Squally Canada provided a boost. He got BYU out of the hole with a 14-yard run, and with 12 more yards on two more carries. However, Mangum was still struggling.

Facing 3rd and 4 one yard shy of the 50, Mangum went deep and found Hifo for 42 yards. Canada took the ball in from nine yards out the next play for a 31-6 lead with 5:30 left in the third quarter. 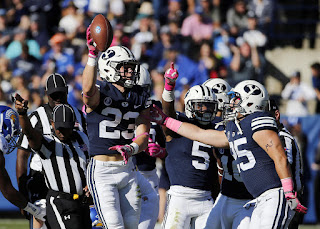 The long ball to Hifo didn't get Mangum completely out of his funk. Two incomplete passes on the next drive led to a three and out, but San Jose State couldn't handle the punt, and Anderson recovered.

As the third quarter ended, BYU had a decision to make on 4th and 5. BYU decided to go for it, and on the first play of the fourth quarter, Mangum hit Simon streaking down the sideline for a 41-yard touchdown.

The Spartans, however, weren't done turning the ball over. San Jose State fumbled the quarterback-running back exchange for the second time in the game. This time, Langi Tuifua was there to recover for BYU.

Joe Critchlow completed a 12-yard pass on first down, but that was all the offense the Cougars would generate. BYU settled on a field goal.

Now, it was BYU's turn to see an opponent desperately move the ball for meaningless yards and add a few late points. San Jose State drove down the field and scored a touchdown with 7:34 to play. That closed the gap to 41-13.

It appeared BYU would add another touchdown after a 14-yard completion by Critchlow, and a 34-yard run by Austin Kafentzis moved the ball to the Spartan 23-yard line. A Cougar fumble at the 15-yard line was kicked into the end zone where San Jose State recovered.

With 4:04 to play, San Jose State had just enough time to drive the length of the field for another touchdown. The Spartans got into the end zone with 42 seconds to play for the final score of 41-20.

PLAY OF THE GAME: Brayden El Bakari's forced fumble and recovery in the first quarter.