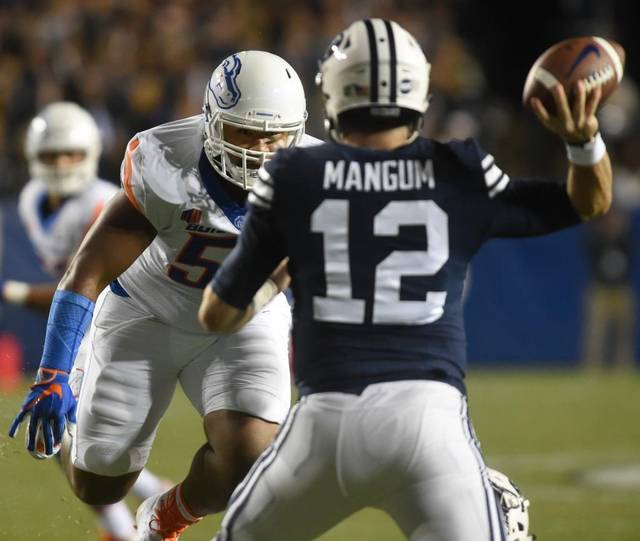 There were approximately 140 plays in the BYU Cougars and Boise State Broncos game last night. Three of them had a more significant impact than all the others and determined the final outcome.

On a 2nd and 10 from the Boise State 27-yard line, Adam Pulsipher forced a Boise State fumble. It bounced around for a few seconds, and Boise State ended up recovering it. The Broncos punted two plays later, but it was a huge lost opportunity for BYU.

To win games, BYU has to be more opportunistic on defense. Translation: force more turnovers. This offense isn't going to put together long, sustained drives, four or five times a game. This would-be turnover would have given the ball to BYU just 25 yards away from the end zone. For the first quarter and a half, BYU was able to move the ball on Boise State. With the momentum of the turnover and already leading 7-0, BYU could have made it 14-0.

That would have, totally, changed the game.

Up to this play, BYU had moved the ball pretty well on the Broncos defense. BYU's first scoring drive started near midfield. BYU was starting this drive on its own 46-yard line. It was a 7-7 game at this point. A good drive that puts points on the board would put BYU back in control of the game.

Instead, Mangum threw an interception on the first play of the drive. It was returned 51 yards to the BYU 22-yard line. It was a complete role reversal. Boise State was the one now in scoring position. They capitalized with a field goal.

For the next quarter and a half, BYU wasn't able to generate much offense. Boise State, on the other hand, scored touchdowns on two of its next three possessions to build a 24-7 lead.

After falling behind 24-7, BYU knew it was now or never to make a comeback. Mangum connected with Micah Simon on a 34-yard pass to the Boise State 27-yard line. BYU was now in scoring position. A quick score makes it a two score game with plenty of time to get those scores.

Not so fast. Simon's big play was called back by a holding penalty on Thomas Shoaf. That set up 1st and 20, and BYU was not able to pick up the first down.