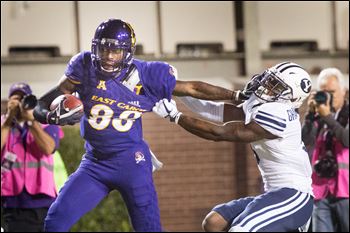 In the battle of the bad, the ECU offense earned the honor of being less bad. BYU could only manage 17 points--that's 33 less than what the ECU defense had been allowing. The Cougars converted 40 percent of their third downs. That is much closer to BYU's season average of 33 percent than ECU's 57.9. While BYU finished with 421 yards of total offense, the Cougars had 185 in the fourth quarter, of which 105 came after the score was 33-10.

Yes. Not only did Tanner Mangum eclipse 200 yards, he reached 300 yards (319). While it is factually indisputable that BYU broke the streak, it still feels kind of hallow. Mangum had just 61 yards at halftime. Well over half of Mangum's passing yards came in the fourth quarter when the game was out of reach.

3. Who will step up on offense?

No one did. Through three quarters of play, BYU didn't look any different than any other game this season. At the end of the first half, BYU couldn't take the lead into the locker room because no one stepped up to score a touchdown from two yards away. It took a turnover by the defense to even get the lone first half touchdown.

4. How hungry are the Cougars?

They didn't seem very hungry. The offense took three quarters to get started. The defense did slow down ECU enough to keep it close at half, but allowed scores on ECU's first four second half possessions.

5. Can BYU crash the Homecoming party?

Definitely not. BYU tied it up at halftime, but moved right out of the way for the Pirates in the second half.


The Editor appreciates all feedback. He can be reached via email at bluecougarfootball@gmail.com
BYU Cougars BYU Football Tanner Mangum