BYU vs. Utah has become a broken record

The rivalry between the BYU Cougars and the Utah Utes has become a broken record. The Cougars and Utes played for the 92nd time last night, but the result was the same as the previous four games. BYU falls behind, makes a rally at the end, but comes up short.

Yet, every year, the boys in blue aren't able to pull it off.

In 2012, BYU scored two fourth quarter touchdowns to close the gap to three points. A fourth down bomb to Cody Hoffman got the Cougars within striking distance in the final seconds. With one second left, BYU missed two field goal attempts and could not send the game into overtime.

The next year, BYU was able to close the gap to seven with a fourth quarter touchdown. Kyle Van Noy and co. on defense were able to get the ball back twice in the final few minutes, but the Cougar offense was unable to finish when it mattered most.

After a break in 2014, a surprise bowl match up in 2015 saw BYU trail by 21 points going into the fourth. Tanner Mangum was able to lead two fourth quarter touchdown drives, but it was too little too late. This was the one exception where the Cougar D did not get the ball back. With 3:23 remaining after BYU's final touchdown, Utah ran the clock out.

Last year, Taysom Hill scored a touchdown with 18 seconds to play to make it a one-point game. In a bold move, BYU went for a 2-point conversion, and the win, but the Utah defensive line overwhelmed the BYU offensive line to preserve the win.

Yesterday, it was a 13-point fourth quarter deficit. BYU got into the end zone once in the fourth quarter. The Cougar D made a quick stop, and BYU took possession again with 1:34 to play. Two dropped passes left BYU without a first down on its final drive. 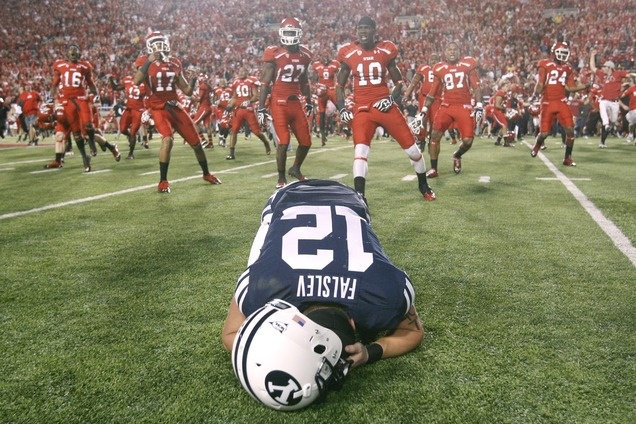 This broken record is breaking hearts all throughout Cougar Nation. "I was disappointed with the result of the game," BYU head coach Kalani Sitake said afterwards. "I'm really frustrated. We just really wanted this game, and now we have to wait another year to play them."

Linebacker Butch Pau'u added, "A lot of the guys are down about this game."

And a lot of fans have a sick, painful feeling knowing their team couldn't capitalize on the opportunities presented and came up short one more time.