BYU gives it the old Hifo, but turnovers prove fatal in Hawaii Bowl 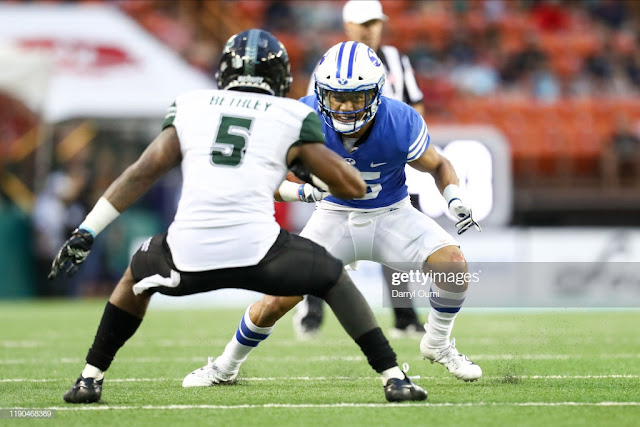 Despite all of the excellent field position, BYU ended up with just 10 points in the second half. Two drives stalled inside the Hawaii five-yard line. This kept the Hawaii Warriors in striking distance.

Hawaii scored its only points of the second half on a touchdown pass with 1:17 to play for a 38-34 win.

BYU quarterback Zach Wilson had the team driving for a possible last-second, game-winning touchdown, but his pass to tight end Matt Bushman with 25 seconds to play was intercepted.

It was the third very costly turnover for the Cougars.

Both Hawaii and BYU punted on their first possessions of the game. After that, both coaching staff's seemed to have figured out how to attack the opposing defenses. Neither team punted the rest of the half. The only time a drive did not end in points, other than Hawaii choosing to take a knee with 18 seconds left in the half, was when BYU threw an interception.

Hawaii had just scored to take a 7-0 lead. Wilson completed a pass to Hifo for 10 yards to convert a 3rd and 4. On the next play, Wilson had Hifo open in the secondary again. The pass was a little behind Hifo, and it went off his hands right to a Warrior defender.

The turnover allowed Hawaii to take a 14-0 lead two plays later. Now, it was a much different game for the Cougars. Rather than tying the game 10 plays later when Lopini Katoa ran into the end zone from one-yard out, BYU still trailed 14-7. Those seven extra points for Hawaii in the first quarter made a huge difference in the fourth quarter.

BYU received the second half kickoff and drove to the Hawaii 44-yard line before punting. The Cougar D made adjustments to its pass coverage that stymied the Warriors quarterbacks during the third quarter.

That's when Hifo became electric returning punts. He returned Hawaii's first punt in the third quarter 52 yards to the six-yard line. Two plays later BYU was in the end zone to tie the game, 31-31.

After a second Hawaii three and out, Hifo broke some tackles and tip toed down the sideline for a 31-yard return to the BYU 46-yard line. The Cougars did nothing with the ball, and punted right back.

The Cougar defense, however, didn't relent. Not only was pass coverage good, but the down linemen were starting to get pressure. BYU averaged one sack per game during the regular season, but would register five on Hawaii. That included one on this drive, which forced the Warriors to punt from inside their own five-yard line. Trying to kick away from Hifo, the punt went only 30 yards before going out of bounds at the Hawaii 34-yard line.

BYU was starting to dominate the line of scrimmage and effectively moved the ball on the ground to the Hawaii five-yard line. Running the ball on 3rd and Goal, Wilson went airborne trying to reach the end zone over a diving defender. As he extended the ball to cross the goal line, a second defender hit Wilson up high. That hit dislodged the ball, and Hawaii recovered the fumble in the end zone.

That was two turnovers and two huge seven point swings.

The BYU defense, however, continued to force Hawaii to punt after just three plays. After just a 14-yard return by Hifo, BYU drove to the two-yard line before settling for a field goal that gave the Cougars a 34-31 lead with 14:37 to play in the game.

With a three point lead and 4:07 left to play, BYU could hold onto the ball for the rest of the game and win. The Cougars had been highly successful running the ball in the second half, but coaches called a pass play on 3rd and 2 with 2:17 to play. The play call was even more surprising considering Hawaii had no timeouts left. The pass wasn't even close to being complete, and even if it was caught, Hawaii probably would have stopped the receiver short of the first down.

Hawaii needed less than a minute to score using two big pass plays to go the length of the field. That gave BYU enough time to try and answer. Wilson completed back-to-back passes to Simon for 28 yards to help move BYU to the Hawaii 39-yard line. With two timeouts left, BYU still had plenty of time to score, but Wilson telegraphed his pass to Bushman and threw his second interception.