Posted by Unknown on April 04, 2013
The Brigham Young Cougars defense was ranked no. 3 in the nation for the 2012 campaign. A defense led by Ezekiel Ansah and Kyle Van Noy not only shut down opposing teams’ run game with ferocity but also was a driving factor in BYU’s offense in many instances. A new linebacking recruit hopes to add his name to the growing legacy of Cougar defenders.

New recruit Fred Warner is a 6-foot-3, 205 pound outside linebacker from San Marcos, California that has really shown off some major skills in high school as a Mission Hills Grizzly. The junior and member of the 2014 graduating class, Warner has shown some big potential in his ability to break past the defensive line and harass quarterbacks and running backs across the Avocado East League conference. His lightning speed combined with ability to read the offense gives him a big advantage against opponents. 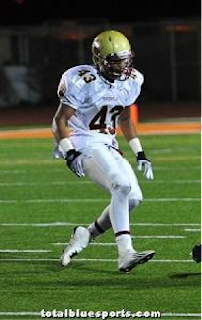 On 247sports.com, Warner is rated as a 3-star prospect. He is considered the 72nd best outside linebacker in the nation, and the 89th best player overall in the talent rich state of California.

The Mission Hill Grizzlies boasted a 10-3 record in their 2012 season, including a 4-0 record in the Avocado East League. Fred Warner was definitely a large contributor to the team’s success. Though there isn’t a lot of statistical information available for this high-schooler, taking a look at the film available makes it clear why there has been national interest in Warner.

Warner will have big shoes to fill as he prepares to transition into college ball in the future with his predecessors including the likes of Spencer Hadley, Jordan Pendleton, and, of course, Van Noy.

The outside linebacker himself is excited about committing to playing for BYU. Here's what he had to say on Twitter:

Fred Warner, the lightning linebacker, will be a great addition to BYU’s defense and will hopefully keep the legacy alive when he moves through the BYU pipeline in the next couple years.