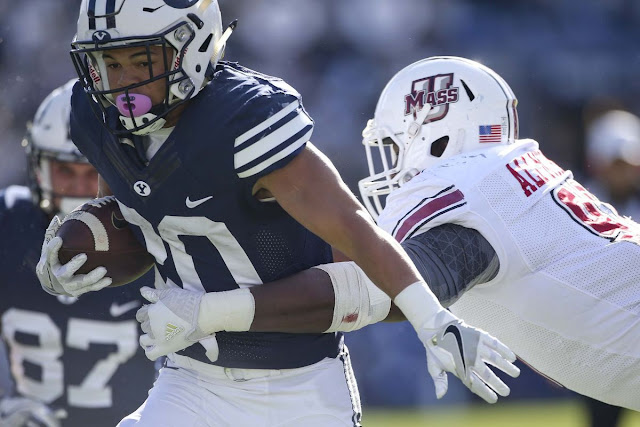 The BYU Cougars will play the UMass Minutemen in less than 24 hours. While waiting for the final hours to tick away, here are five questions to consider.

1. Which BYU senior will shine the brightest?

This will be the final home game for 18 BYU seniors. Who will have the best game? Will an unheralded senior steal the show? In recent years, we have seen Robbie Buckner get a surprise start and make an interception (2012). Remington Peck, a defensive lineman converted to tight end, threw a touchdown on his senior day in 2015. Or, will we see Mr. Consistent Fred Warner lead the pack?

2. Did Joe Critchlow have beginner's luck, or will he play better than or equal to last week?

It was a solid first start for Critchlow last week. He did exactly what BYU needed him to do. Can he match that performance, or have an even better game in start number two? He has the benefits of playing at home, and playing competition that is probably not as good as last week.

3. What will Squally Canada do for an encore?

Coming off the best game of his career, it is probably too much to ask for another 200 yards. What about 100 or 150? He will have to play with the disadvantage of being a known commodity. UMass has been preparing for him all week. Is he up to the challenge?

4. Who will leave with the distinction of being the worst FBS Independent?

BYU (3-8) and UMass (3-7) are well behind the 8-2 pace that Army and Notre Dame have set for FBS Independents. In fact, the Cougars and the Minutemen will be fighting to avoid the distinction of being the worst independent team. To the loser goes the spoils!

5. Who is more battle tested?

Like BYU, part of the reason UMass has such a bad record is the schedule. The Minutemen have played two SEC schools (Tennessee and Mississippi State) and a good Ohio team. In fact, Mississippi State had a harder time dispatching UMass than BYU. Winning tomorrow may come down to which school came into the game as the more battle tested team.