BYU Football: Did you know? (Points by Placekickers) 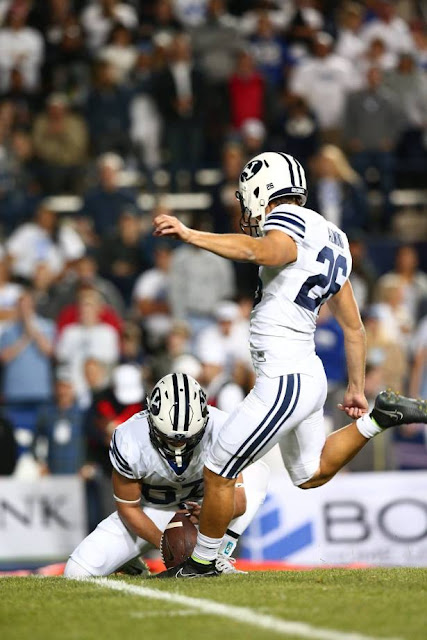 Now that the season is over, Blue Cougar Football will return to the offseason format for the weekly trivia post.


Did you know that the last time BYU's placekickers scored less than 66 points was 2003?

In 2003, Matt Payne was the exclusive placekicker for the BYU Cougars. He scored just 62 points (14 field goals, 20 extra points).

Going back further, the second to last time was 1997. Owen Pochman was BYU's only placekicker that season. He scored just 56 points (9 FG, 29 XP).

Almond was also the team's leading scorer this year. The last time BYU's leading scorer had fewer than 61 points in the season was 1991. Eric Drage led the team with 60 points that season. However, BYU split the placekicking duties that year--much more evenly than the Cougars did this season. Earl Kauffman scored 47 points (5 FG, 32 XP), and Keith Lever scored 21 points (1 FG, 18 XP). That is a total of 68 points.

The 2019 football season has been anything but predictable for the BYU Cougars. Coming off of two head-scratching losses to Toledo and South Florida, BYU coasted to a win over the previously undefeated Boise State Broncos, 28-25.

Baylor Romney become the third different quarterback to start for the Cougars in the last three games. Weather was not going to make the first start of his career easy. It rained and snowed most of the game.

Boise State certainly looked like the better team on the opening drive of the game. The Broncos quarterback completed all three of his throws for 43 yards, and they scored on a 12-yard run to take an early 7-0 lead.

It looked like it would be another long night for the Cougar D, especially when the BYU offense quickly found itself facing 3rd and 12 on the ensuing possession. Even after a Boise State defender jumped offsides to make it a more manageable 3rd and 7, there wasn't much hope for BYU to convert the first down.

Romney then made his first of …