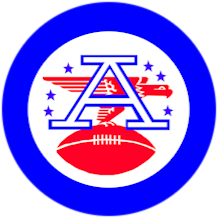 While preparing the Tuesday Timeline: BYU and the NFL Draft, I came across some interesting information that I had never seen before, and to be completely honest, had never before considered. Besides the NFL, there are and have been other professional football leagues. For example the Canadian Football League (CFL), and the short lived United States Football League (USFL). In the 1960's, there was another: the American Football League (AFL).

Since the AFL and NFL were fighting for the same players, sometimes a player was drafted by each league. BYU does not include anything about the AFL draft in its media guide, whereas the CFL and USFL picks are mentioned.


Did you know that BYU had three players drafted by both the NFL and AFL?

Horne was taken by the Oakland Raiders in 19th round of the 1962 draft.

Robinson was a 21st round selection of the San Diego Chargers in 1964.

Brewster was drafted by the Boston Patriots in the 10th round of 1966.


The Editor appreciates all feedback. He can be reached via email at bluecougarfootball@gmail.com
Allan Robinson BYU Cougars BYU Football Dennis Brewster Kent Horne