Posted by The Editor on December 06, 2012
Tonight as part of the Home Depot College Football Awards Show, the Augusta Sports Council will hand out the Ray Guy Award to the nation’s best punter. At least, that is the premise for the award. In reality the nation’s best punter might not have even been a finalist for the award. I speak of Brigham Young Cougars punter Riley Stephenson.

The Augusta Sports Council (ASC) uses a voting panel comprised of the head coaches and sports information directors at all the FBS schools, as well as one media member from the metropolitan areas where each FBS school is located and the 12 past award winners. On its website, ASC describes the voting criteria as follows:


Punters are evaluated on their overall statistics and contribution to the team. Particular emphasis is placed on the following statistics: net average, percentage of total punts inside the 20-yard line and percentage of punts not returned.

Were all three of them really better than Stephenson? After all, he is second in the nation in gross punting average, leads the nation in number of punts 50 yards or longer, and was just named second team All-American by CBSSports.com.

An in depth look at each finalist’s season stats and how they compare to Stephenson seems to justify any outrage that BYU fans may be feeling over Stephenson not being a finalist.

* The NCAA only provides net punting stats for teams. These net averages are the team averages. In the case of Allen and Kovanda they made every punt for their respective teams. Christie made 62 of 64 punts for , and Stephenson made all but one punt for BYU. Any differences in Christie and Stephenson’s actual net average are minimal.

To aid in comparing Stephenson to the other finalists, I have prepared a table that shows Stephenson’s stats and how much better (+) or worse (-) the three finalists were. 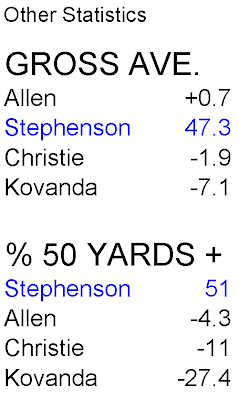 The following table ranks the four punters based on how they finished in each statistical category. 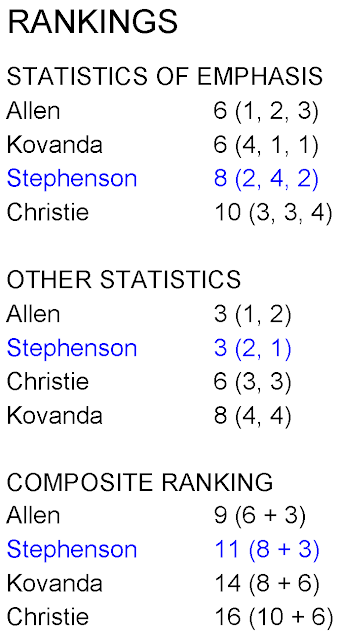 The interpretation of what it means to place particular emphasis on the stated statistics is left entirely up to the voters. If equal weight were given to all five statistics used above, then 60 percent of the composite ranking would be from the three specified statistics. That should pass anybody’s definition of emphasis. Perhaps some voters think more emphasis should be given to those three stats, which is their prerogative.

No matter how much emphasis is assigned, I think one thing is clear: Stephenson outperformed Christie from . Among these four punters, Christie is no higher than third in any statistical category. He is also the only punter to have a punt blocked. Based on the voting criteria given by ASC, it is hard to justify including Christie as a finalist over Stephenson.

Is the fact that Christie is a finalist a sign of voter bias? After all, he is from the . The prevailing thought among college football fans is that regional and conference biases exist when it comes to voting for other major college football awards, as well as the weekly top 25 teams.

The Ray Guy Award Coordinator at ASC was kind enough to discuss with me the potential for voter bias. She said ASC did not feel that voter bias was an issue. She pointed to the fact that previous Ray Guy Award winners had come from both automatic qualifying and non-automatic qualifying conferences. She explained ASC feels that stressing the voting guidelines is sufficient to prevent the award from being tainted by voter bias.

I was also told that measures are in place to ensure there is no fraudulent voting. ASC has never felt compelled to have the voting panel recast their votes, and the outcome of the voting process is not evaluated for any glaring oversights by the voters. ASC’s philosophy is to leave the outcome in the hands of the voters so as to keep the process as objective as possible.

It is obvious that ASC put a lot of time and thought into the voting guidelines. That doesn’t mean it can’t be evaluated over time and make adjustments, if necessary. Looking at how the voting has gone so far this year, I find a couple of concerns.

Looking solely at the statistics of emphasis, Scott Kovanda comes across as a worthy finalist. He is the best in two of the three areas of emphasis. However, he is just 16th nationally in net punting and 71st in gross punting. I find it very hard to accept that a punter who ranks so low nationally in these two stats is legitimately one of the three best punters. I do find it impressive that 88.6 percent of his punts were not returned and that 59 percent of his punts were inside the 20-yard line, but it isn’t the kind of impressive that makes me think he is one of the best punters in the nation.

To me, having Kovanda as a Ray Guy finalist is akin to a quarterback being a finalist for the Davey O’Brien or Sammy Baugh trophies because he threw amazingly few interceptions and completed a very high number of his passes, but didn't pass for 3,000 yards and has less than 20 touchdown passes. While everyone wants their quarterback to avoid throwing interceptions and to throw accurate passes, they will gladly accept that he throws a few more interceptions and completes a few less passes if that means he will throw for a lot of yards, touchdowns, and have a high pass efficiency rating. The latter three stats are key to a quarterback getting serious consideration for these awards that represent the best quarterback in the country.

My other concern is that the punter has very little control over the statistics that voters are told to emphasize. In order to have a high percentage of punts inside the 20-yard line, the punter needs his offense to move the ball at least to the 40-yard line most of the time. The net punting average and the percentage of punts not returned depends much more on the other 10 players on the punting unit than the punter. Poor tackling or gunners who struggle to get downfield fast could result in a net punting average that is significantly less than the gross and in a high percentage of the punts being returned regardless of the hang time.

I don’t think it is possible that perfect criteria can be established for any college football award. I recognize ASC has made a diligent effort to establish important guidelines. At the very least, I think they should add percent of punts 50 yards or longer as a statistic to emphasize. When field position isn't in a team's favor, a punter can change that with a huge punt. The punt may only reach the 22-yard line, but there is momentum that helps the defense from a field position changing 66-yard punt.

Despite whatever flaws may exist in the Ray Guy Award criteria, I feel the stats justify the sentiment that Riley Stephenson was snubbed. He has had an excellent season and should be one of the three finalists.

The Editor appreciates all feedback. He can be reached via email at bluecougarfootball@gmail.com
Brigham Young Cougars Riley Stephenson