The BYU Cougars are going back to North Carolina, this time to face a Power 5 opponent 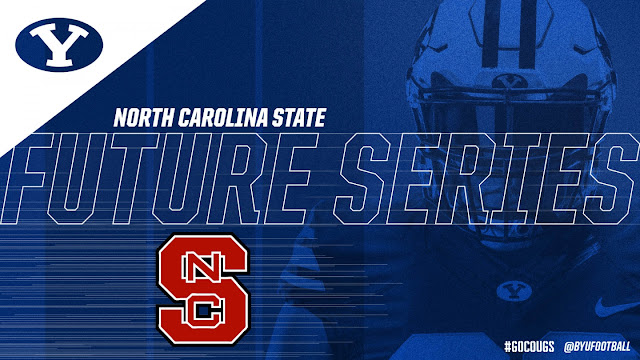 The BYU Cougars have announced a home-and-home football series with the North Carolina State Wolfpack. The two games are a little ways off. Game one will be played in 2024, and game two in 2030.

Two reasons for Cougar fans to be excited about this series are 1) North Carolina State is a member of the Atlantic Coast Conference (Power 5), and 2) Game one will be played in November (Nov. 9). Balanced home-and-home series with Power 5 opponents, and quality competition in November have been two of the biggest scheduling challenges for BYU as an independent.

"I really like this home-and-home series with NC State," said BYU director of athletics Tom Holmoe. "The game in Raleigh provides a unique late-season travel opportunity for our football program, and it's great to bring another ACC opponent to Provo."

This will be the first time the two schools have met.

The Wolfpack finished the 2017 season 9-4 and ranked 23 in the AP and Coaches polls. NC State has had a winning season seven of the last eight years.

The closest connection BYU has with North Carolina State is that Norm Chow landed there in 2000 after coaching at BYU from 1973-1999. He tutored a very young Philip Rivers that season.

Other notable NC State football players include:
BYU travelled to North Carolina for the first time in program history this past season for the East Carolina game.

The Editor appreciates all feedback. He can be reached via email at bluecougarfootball@gmail.com
BYU Cougars BYU Football North Carolina State Wolfpack Tom Holmoe