The BYU Cougars exploded on offense against the over matched University of Massachusetts Minutemen. In only one half of play, quarterback Zach Wilson passed for 293 yards and four touchdowns. Reserve running back Jackson McChesney rushed for 228 yards on 15 carries as BYU used a balanced attack in its 56-24 win.

UMass is one of the worst, if not the worst, teams in the nation. BYU took advantage of that to have its most prolific offensive performance of the season (628 yards). The Cougars, however, got off to a little bit of a slow start. BYU received the opening kickoff, but failed to get a first down when Wilson was sacked on a corner blitz on third down.

UMass didn't get a first down, either, on its first possession. The Minutemen punt pinned BYU back at its 13-yard line. Lopini Katoa ran the ball on three of BYU's first four plays of the drive to do most of the work to move the ball past the BYU 40-yard line. Wilson threw a swing pass to Tyler Allgeier who took the ball down the sideline for a 57-yard touchdown.

UMass responded with its only drive of the first half. The Minutemen picked up two first downs to move to the BYU 49-yard line. After a five-yard loss on 2nd and 10, UMass was unable to pick up the first down and punted.

UMass did not gain another first down for the rest of the first half. BYU would keep scoring touchdowns.

Wilson completed five of five passes for 63 yards on a 13-play, 88-yard drive, but it was Katoa who would get the touchdown on a three-yard run. That made it 14-0 just two plays into, what would be, a historic second quarter.

On the first play of BYU's next drive, Wilson completed a 48-yard touchdown pass to Talon Shumway.

Katoa scored his second touchdown on BYU's next possession. This time through the air from 14-yards out.

After a 15-yard pass from Wilson to Micah Simon, McChesney found the end zone for the first time on a 44-yard run.

JJ Nwigwe intercepted a pass to give BYU a short field. It would be another two-play scoring drive for BYU. This one ending in an 18-yard pass from Wilson to Gunner Romney.

When BYU got the ball back, Wilson completed all four of his pass attempts for 51 yards on the Cougars' seven-play, 59-yard drive. Aleva Hifo scored on a five-yard run.

That made it 49-0 with 47 seconds left in the first half. The Cougars had scored 42 of those points in the second quarter, which broke the school record from 1990 of most points scored in a quarter (36 in fourth quarter vs. Washington State).

UMass fumbled the ensuing kickoff, and Dayan Ghanwoloku recovered for BYU at the UMass 31-yard line. BYU continued to attack. A 16-yard catch by Shumway gave the Cougars an opportunity to kick a field goal on the final play of the half. It bounced off the upright and was no good.

BYU had amassed 440 yards of total offense to 31 for UMass. Wilson completed 17 of 20 passes for 293 yards and four touchdowns. He would not play at all in the second half.

With the outcome decided, BYU used a lot of back ups in the second half. There was a huge drop off in play, which allowed UMass to move the ball and score points. The Minutemen's first points, however, came after recovering a muffed punt at the BYU 12-yard line. They scored on a pass the very next play to make it 49-7.

BYU didn't pick up a first down, and promptly punted the ball back to UMass. For the first time since their second drive of the first half, the Minutemen were able to move the ball. The Cougar D stiffened in scoring territory, and limited UMass to a field goal. It was now 49-10 with 7:13 to play in the third quarter.

BYU and UMass then traded punts after each team was able to move the ball some, but not enough to get into scoring range. That's when McChesney ripped off a 62-yard run, followed by a 12-yard run for a touchdown for BYU's only score of the second half.

Two good pass plays helped UMass move to the BYU four-yard line. The Cougar D then made a goal-line stand. A big hit on 3rd and Goal kept the UMass receiver one-yard shy of the end zone. UMass was denied by the Cougar front on 4th and Goal.

McChesney broke loose for a 51-yard run, which put him well over the 200-yard mark for the game. His 15.2 yard per carry average on 15 carries is just slightly behind the record Taysom Hill set with 259 yard rushing on 17 carries against Texas in 2013.

BYU continued to run the ball until the game ended.

During the first half, a UMass player suffered a serious injury and was carried off on a stretcher. While he was still down on the field, it appears BYU held a team prayer for the player. 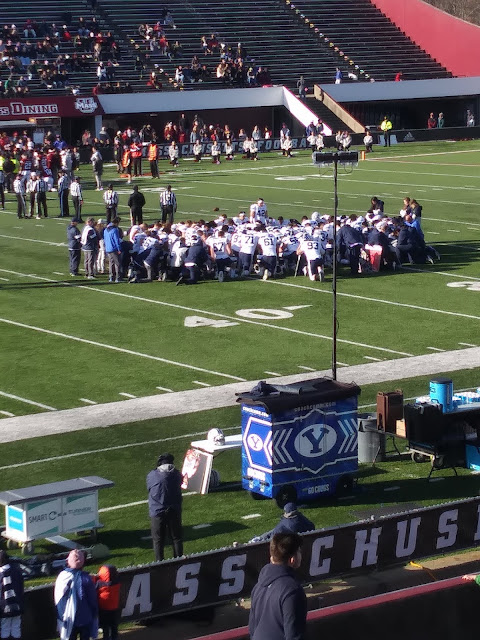